Cryenas are mutant dog-like hyena creatures that the Flock encounters multiple times throughout the course of Maximum Ride Forever.

While the entire Flock (save for Dylan) investigates the remains of Sydney, Australia, several of the creatures attack them while they stop by a penthouse suite for food.

Cryenas are described as being three times the size of a Great Dane, heavily muscled like a bulldog, and as having long-fanged mastiff jaws. They are furless, and their exposed skin is wrinkled and speckled with black spots; their heads are also too large for their bodies.

Also, as Fang finds out during a gruesome one-on-a dozen fight against the beasts, they are cybernetic experiments created to track down and kill the flock and other mutants. 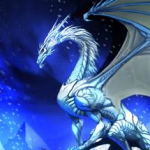